Last week, Presidential nominee and Senator Elizabeth Warren called for the cancellation of student loan debt for 42 million borrowers. According to an article by InsideHigherEd.com, this would result in cancelation of $50,000 of loan debt for former students who incomes are less than $100,000 and even provide forgiveness for those with incomes up to $250,000. Simply put, I believe this is a bad idea and imprudent public policy at best.

Student debt has continued to rise relentlessly over the past several decades. Forbes estimated that 45 million borrowers have loan debt totaling $1.6 trillion.[1] Student loan debt is now the second largest debt by families next to mortgage debt, with an average borrower debt of $28,650. As well, over 5 million borrowers are delinquent on their loan payments totaling $101 billion. Loan debt is a serious and significant issue for students, parents, and even grandparents, but mostly for society-at-large because it acts as an anchor to the economy when such a large percentage of the population are tied to a significant, non-mortgage monthly payment. Thus, the call for wiping out or reducing student debt resonates with most of America. Most people see student debt as a critical problem and helping people in some manner seems like a prudent policy. However, doing so in a fair and equitable manner is difficult. In my case, I argue that it shouldn’t be done at all. Here’s why. 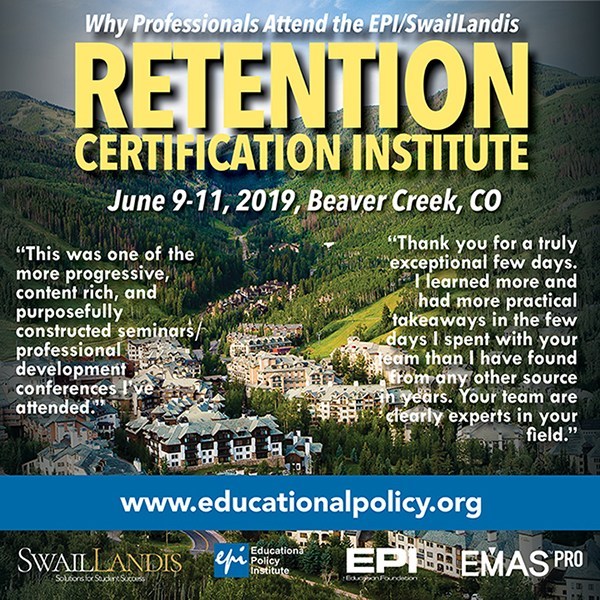 Without trying to be caustic, the first reality is that people enter higher education with the knowledge that it is an expensive proposition. If students enroll in higher education without a full understanding of the cost and how loans work, then bad on them. Yes, perhaps bad on the institution (we’ll talk about that later), but ultimately bad on the student. Being a college student means taking responsibility for the decisions, even as an 18-year old. Do we need to be better on our advising and ‘college knowledge’ prep for students? Absolutely, but the student (and family) must take their investment seriously.

That point gets more complicated when we understand that a relative blanket expulsion of debt is not completely equitable. Yes, we can understand that student debt has a much larger impact on lower-income students than others. But under most proposals, affluent people—or at least those with relatively affluency—would benefit greatly from loan forgiveness. I do not believe that people earning $200,000 and above need to have their student debt wiped out. Perhaps not even those with $100,000 or above. At a minimum, if such a policy was to go through, then it should go to those with the greatest need. But then again, those with the greatest need are not all the same type of people with the same issues.

For some, even low-income students, the accrual of student loan debt has occurred because of certain choices that they or others made on their behalf, including: (a) attending a more expensive institution than they could afford; (b) inability to keep up grades to continue certain institutional and ancillary grants; (c) the failure or withdrawal from too many classes, extending their college ‘career’ to five or six years, or even longer; and (d) the misuse of loan funds on things not related to the cost of a higher education. And yes, there are millions of students who did none of these things but still ended up with student debt. There are advisors who advise poorly and colleges that are less about students and more about business. But everyone makes decisions and decisions have consequences. Should people who make poor financial decisions be lumped in with those who do not? Surely not, but that stated, how would we decide who did and who didn’t? Thus, it gets complicated to be “fair.”

In the end, I do not believe taxpayers should be burdened with decisions made by other people who have also benefited from a college education. Just like we can argue whether Wall Street and banks should not have been bailed out, we can argue that students shouldn’t be, either.

There has been a lot of fuel to the fire to the student debt issue. First and foremost is the sheer cost of higher education. Understand that the cost (not price) of producing a higher education was acceptable when it was confined to a relatively small percentage of the population. However, with the massification of the system dating from 1862 to today, the cost of educating over half of the US population is enormous. In fact, 66 percent of high school graduates end up matriculating to college immediately after graduation.[2] This cost is, arguably, too high for taxation to handle, which means that individuals must pay part of this cost through tuition, fees, room and board, books, and other necessary expenditures. (By the way, the idea of a free higher education is equally absurd. See this).

This, too, is a complex discussion. On one hand, state support for higher education has increased above inflation over the past quarter century. However, on a per student basis, it has decreased during this same time period.[3] Second, institutions have not been able to contain the cost of providing a higher education, related almost exclusively to the cost of human resources on campus. These two items have resulted in students and families taking more of the brunt of total cost escalation. The federal government has provided a form of safety net through need-based grants (e.g., Pell), need-based loans (subsidized loans), and non-need-based loans (unsubsidized loans). The feds aren’t the bad guys in this ; they are simply providing necessary resources for students to pay for an expensive education, even at public institutions. The problem is multi-fold and includes both reasons made above.

There is another important problem with student loan debt, and that is the demand we are placing on a higher education. This insatiable desire to suggest that a four-year degree is the brass ring for a career is misguided, ill-informed, and arguably worse—immoral. Unlike other countries, we have placed such an emphasis on the four-year degree to the degradation of other postsecondary programs, including associate’s degrees, certificates, apprenticeships, and other short-term training programs. I’ve published several Swail Letters on these issues using figures from the US Bureau of Labor Statistics (BLS). The fact is that most future jobs do not require a four-year degree program. One wouldn’t know that from the sheer domination in the news about the value of the bachelor’s degree. (See HERE and HERE for more information). It isn’t that the BA isn’t useful. It obviously is. But it is necessary for a relatively small piece of the economy.

As an aside, the federal government already has a loan forgiveness program that eliminates a federal direct loan after making 120 continuous monthly payments (equal to 10 years) through working full time for a non-profit or eligible employer. The program is designed to take the long-term financial burden off of students who enter careers that are for the greater public good and typically pay less than other jobs in the economy. However, there are people who game this system, too. While I believe in the principal of this program, I also believe that it needs to be better regulated or eliminated so that people who graduate from high-priced selective institutions and earning large salaries are not able to have their debt reduced or forgiven through a program like this. In many cases, those are the people who are taking advantage of this federal program.

Perhaps it is time to circle the wagons and reign in our state and federal resources. Currently, student loans are provided to all students who request them. This is an oversimplification, but mostly true with minor exceptions. These loan dollars, as are federal Pell grants, are accepted at all and any of the 7,000-plus Title IV institutions across the country.[4] Perhaps it is time to cut off private non- and for-profit institutions from Title IV programs. To be fair, this would impact the equity agenda that aims to level the playing field by providing access to some of our most selective institutions (e.g., Ivy League), but perhaps public policy should focus entirely on public institutions and leave the others to deal with their own institutional aid however possible. Perhaps those institutions should bear the responsibility for equity with their endowment and institutional aid programs.

In summary, I understand that thousands, if not millions, of people are seriously impacted by student loan debt. But decisions were made and I argue that taxpayers should not be held responsibility for those decisions. Perhaps there is some middle ground worthy of discussion, but as I pointed out, there exist low-income students who made poor financial decisions with other people’s money. While I am supportive of bailing out a certain population of students who have significant issues not due to themselves, I have little interest in bailing out those who failed to pursue higher education in a prudent fashion.

This problem, of course, will not recede, and, in fact, will only get worse because we continue to push for this misrepresented need for more and more higher education while the higher education system, itself, does little to tamp down the cost drivers. If we truly want more people to go to college, then there must be a less-costly way of providing a postsecondary education. If not, we will continue to have a discussion about loan forgiveness in perpetuity ad nauseum.

2 thoughts on “The Problem with Loan Forgiveness”