This past Wednesday, British higher education students took to the streets of London to decry the Conservative government’s plans to significantly raise tuition fees. It has been reported that the government plans to raise the fees by as much as three times the current price to £9,000, or about $14,000 US/CDN. The protest involved an estimated 50,000 people, and included damage and fires in the streets (see photo). 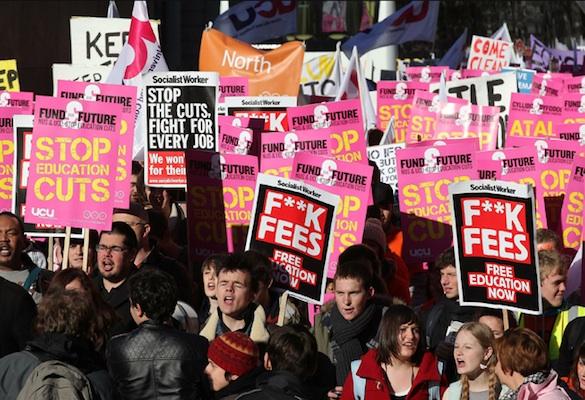 This is not the first time that students have taken to the streets to protest tuition increases and other issues. Just one week earlier, 30,000 students protested in Dublin against the ruling Socialist Party’s desire to double registration fees to about €3,000. In June 2010, University of Puerto Rico students protested proposed tuition increases of 150 percent. Their protest took the form of a “sleepover” in tents on the lawns of the university. Not so much a riot.

The United States is not immune to protests. On February 26, 2010, a group of approximately 200 students took the streets of Berkeley, California, to protest increases in student fees and reductions in programs and services at UC Berkeley. While there was some damage done during the protest, it was nowhere near what occurred in London. In fact, it has been reported that only Latte drinkers were allowed to protest (OK, not true).

Perhaps the most famous student protest occurred in 1999, when students from Mexico’s National University (UNAM) staged a nine-month strike against the university’s plan to introduce tuition. Introduction may be a strong word. UNAM did have tuition before that time, but it was at the low, low price of about two cents (US) per year. Yes, that is not a typo. Two cents. Per year. The university wanted to set tuition to $140 US/year. The strike finally ended in February 2000 when police stormed the main campus, arresting 632 protesters. In the end, no new fees were introduced.

Chinese students have also protested, but not over funding. In 2006, 10,000 students of Shengda Economics, Trade and Management College, a satellite campus of the prestigious Zhengzhou University, protested their university’s decision to put the Shengda name on student diplomas instead of the Zhengzhou University, as originally agreed, thus devaluing their diploma. This is related to financing college, because families sending their children to Shendgda College, a private college, paid a premium cost (about $1,250 US/year) with the agreement that they were getting a Zhengzhou diploma.

Students wield significant power in many countries, including Britain, Canada, and Mexico. Student unions in the US, alternatively, have a much lower profile and less influence on public policy.

The challenge remains, especially in the UK, that governments are in a difficult predicament due to strained budgets, high unemployment, and general unrest in the civilian population due to the economic pinch felt globally. This latest round comes at a time when governments are still talking about expanding higher education, especially to those who are historically underrepresented in tertiary education. Thus, it becomes a push-pull issue, where governments are caught trying to reduce spending in light of lower taxation revenues, while also further opening the doors of higher education.

Obviously, the algebra for this does not work. You simply can’t have it both ways UNLESS another revenue stream comes into consideration. In this case, it is the private payer, or rather, students and families, that must make up the difference if the government is unable to do so. What protesters are hoping is that the government will rescind its policy proposal and fund higher education as before. But this is unlikely to happen because the costs of higher education are expanding at rapid rates, and the government, that is, the taxpayers, is unable to keep up.

Ireland and Britain are going to have to make some tough choices about who goes to university and who pays for it. But they need to be honest about these choices. Mexico caved due to their student protest a decade ago. The result was a decline in the quality of education at UNAM, as there simply was not enough funds to keep it up to the academic level warranted.

Peaceful protests do provide an important role in the development of public policy, and should not be impeded. In democratic societies, there needs to be space for groups to get their message out. However, when people get hurt, cars burned, and buildings pillaged, the message that is left is that these people do not have the cognitive capacity to wage a decent argument. They lose in this scale of protest.

We do know that the UK government will hear the message, however. What impact it will have must be seen. But all stakeholders must understand that what was once free or inexpensive before cannot be in the future. The math just isn’t there. I do not advocate massive hikes in tuition fees, nor do I condone reductions in important services on college campuses. But in the end, someone has to pay, and we need to have forthright, fair, and open dialogues about how these two seemingly contradictory positions can meet in the middle.