In 2013, state and federal governments spent approximately $150 billion on higher education. This includes funding for Pell Grants, state grants, research, and direct subsidies for students. To put this in some perspective, federal funding amounted to $227 per person in the US, and about double that if state funds are included. On the federal level, this accounts for 2 percent of the federal budget. By comparison, the US defense budget in 2013 was $610 billion, or 17.5 percent of the US budget. This isn’t to discount the value of $75 million in federal money. That amount is simply huge, but everything pales in comparison to the US Department of Defense budget.

Beyond state and federal funds, parents and students pay over $63 million annually on tuition and fee charges. This does not include student housing fees.

The Educational Policy Institute created the Retention Calculator to try and put a number to this issue. The calculator is free for use and we urge institutional administrators to use the calculator to help guide their student success initiatives and campus budgeting. 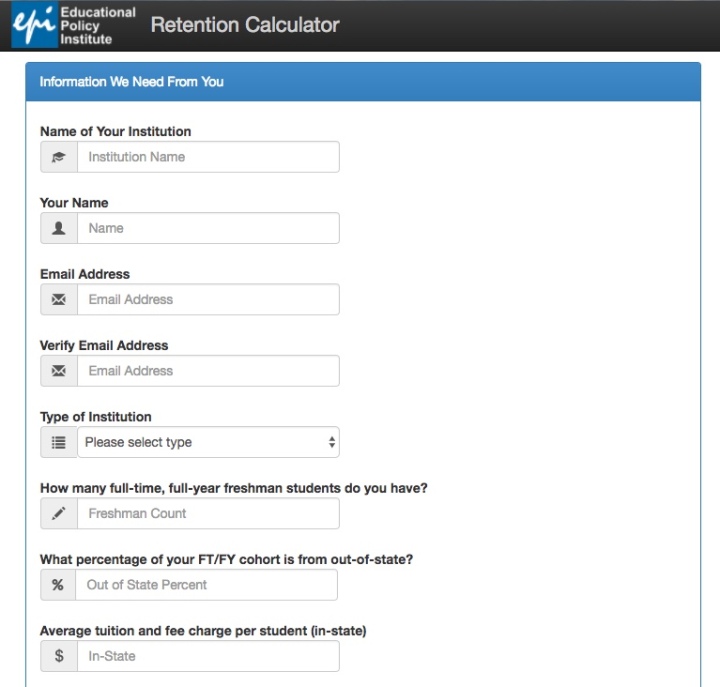 For today’s example, I am using Virginia Commonwealth University (VCU) in Richmond, Virginia, and Youngstown State University (YSU) in Youngstown, Ohio, both of which were picked for no particular purpose. The numbers used in the calculation were pulled from institutional documents, IPEDs, the College Board, and other sources. I had to generate some numbers based on others. Understand that although I believe this is by far the best cost calculator available, it is still not a perfect science because of the various imperfections of higher education data and the sheer complication of cost and price. But it provides a legitimate record of cost for the university.

Given this scenario, the 5,000 freshman students at VCU will translate into approximately 3,100 graduates within six years. Based on the output from the EPI Retention Calculator, here are the findings:

The Ivy Leagues and other very selective institutions are outstanding and tell us two things: (1) these are among the most selective institutions in the world; and (2) they do prudence with respect to student support services to students on campus. The moderately selective and non-selective universities are in a difficult boat, however. Their incoming students are more diverse, academically and otherwise, with entering student SATs of 900 to 1200 rather than 1500 and above. This makes all the difference in the world in terms of retaining students. However, one rule applies to all universities regardless of whom they admit: promise to do whatever possible to help students succeed.

If institutions dedicate themselves to improving student and academic services to enhance the student experience, they can increase the percentage of students returning after freshman, sophomore, and junior years and, in turn, increase the four- and six-year graduation rates at their institutions.

Here is the dollar value of improving the fall-to-fall rate at VCU:

Given this scenario, the 2,868 freshman students at YSU will translate into approximately 866 graduates within six years. Based on the output from the EPI Retention Calculator, here are the findings:

As said with the VCU example, YSU cannot retain all students over a six-year period. But they can do better and the money saved would easily pay for whatever efforts they spend, as long as they can front load the effort.

These calculations are highly conservative. They do not include the cost to institutions for inflated staffing and infrastructure for recruiting and admitting 150 percent of their expended student body. Institutions understand that they will hemorrhage students, so they build it into their staffing model. If institutions could be more effective in (a) recruiting better-fit students who have a higher propensity of success, and (b) do more with the students while under their care, then institutions could hire accordingly and spend accordingly. Instead of working at a 150-percent model, they could perhaps work at a 120- or 110-percent model. Harvard works on a 102-percent model. Pretty cool.

[1] Title IV institutions are those that are approved and accredited to provide federal financial aid to students. The 27 million number is unduplicated students. See http://nces.ed.gov/pubs2016/2016112rev.pdf.

One thought on “So How Much Does Student Departure Cost Your Institution?”