Last week, a video of a high school student in Tennessee went viral. The student, Ethan Young, made an extraordinarily impressive statement to the Knox County School Board about the challenges and problems with Common Core Standards. Anyone who watches the video will undoubtedly be impressed by this young man’s oratorical skills. I immediately wanted to hire him. He doesn’t need a college degree. He’s ready to be an RA with me. 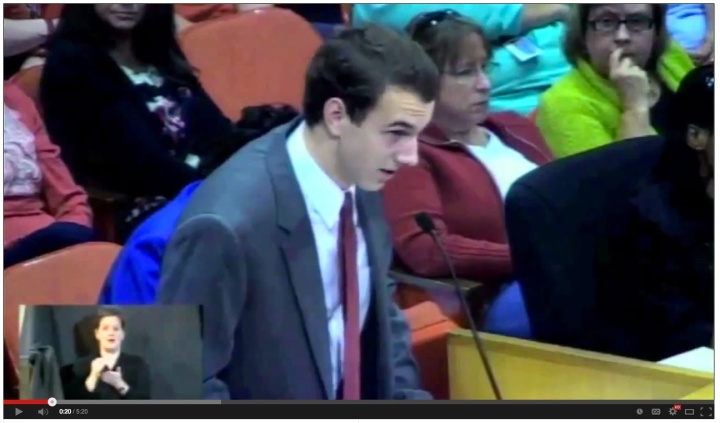 But as dramatic and wonderful as Mr. Young’s speech is, there is one problem—Ethan is wrong. I don’t say that just because Glen Beck and the ultra-right wing conspiracy theorists immediately latched on to it—but rather, because it just isn’t terribly accurate.

For the uninitiated, the Common Core State Standards is a grassroots process to align K-12 curricula and standards to reduce the discrepancy across the country. The standards, as Mr. Young addresses in the video, are the result of initial work by the Council of Chief State School Officers (CCSSO), a bi-partisan non-profit organization consisting of the state superintendents of education for the 50 states plus other territories, and the National Governors Association, also a bi-partisan, non-profit organization consisting of all US Governors. The creation of the standards was, as accurately portrayed in the video, given a fiscal push by the Bill & Melinda Gates Foundation and included other partners including Achieve, Inc., a non-profit, non-partisan education reform organization that also is involved in achievement testing. The College Board, ACT, and ETS were also involved to some degree during the development of the standards. Interestingly, the former President of Achieve now serves as the President of The College Board.

On a side note, Mr. Young makes a comment about the use of Gates funding to propel the standards. I’m not sure why it is such a badge of dishonor to receive millions of dollars from The Bill and Melinda Gates Foundation, but perhaps he can do a second video to elucidate us on some of these issues. Professionally speaking, I would have died (figuratively, of course) for the kind of philanthropic funding that Achieve received. And it wouldn’t make us “bad.” Just more “gifted.”

The tenet of Mr. Young’s speech is that reducing the nation to the common core “is ruining the way we teach and learn.” I think that’s a stretch. First, we have always had high-stakes tests, but typically at the district or state level. We’ve had national tests in mathematics and science for the better part of two decades, so I’m not sure how a new national standardized test (one based on standards, no less) really moves the needle on that one. It’s a test. Teachers teach to the test. We even teach teachers to teach to the test. But that isn’t really the point.

In the core subjects, including mathematics, science, English (including reading, writing, and literature), and History, there is not one single significant argument to suggest that students in Maine should learn something different than students in California. In fact, there is little argument that they shouldn’t be comparable to students in Edmonton or Perth. The basics, especially in mathematics and ALL sciences, are the same throughout. And students across the country should be taught the same core set of knowledge and skills, and through about the same type of pedagogy. This isn’t about lessening the impact of teachers; it surely isn’t about making curriculum “teacher-proof.” But it is about trying to ensure that all students receive the proper content in a method that improves both the acquisition of knowledge and skill while also trending toward retention.

So, this isn’t a one-size-fits-all as Mr. Young suggests. It is about ensuring that all students have a chance to learn the knowledge that we see as critical (that is a very different argument that I think is worthy of debate) for an educated citizenry, certainly in a global marketplace. He notes the help and guidance of his teachers and they should be uniquely proud. But let’s be real here: if this video is any evidence of who Mr. Young is—he is exceptional. He is not average by any definition, so the rules don’t really pertain to him. He probably had special care and guidance because he was the truly outstanding, one-in-a-million student that his teachers dreamed of having. This isn’t a negative comment about this young man. It’s just that most people aren’t like him. I know wise people in DC that do not possess his skill sets. This man has a future.

But the common core is a good thing. It is meant to ensure that all our children learn what we see as important. Little Suzie isn’t competing with Becky down the hall. She’s competing with Juan in Madrid, Veronika in Moscow, Azizi in Ghana, and Myeong in South Korea. The world just got a whole lot smaller in a pretty small space of time.

I don’t like standardized testing. No one likes to take a standardized test. But as a former teacher, I understand it. We have to have gauges of what students learn. We need to use such tests in a diagnostic manner to improve instruction for students—each student—by each teacher. That is our failure thus far—using them appropriately. These tests, or any tests, when prepared properly and used appropriately, can be a huge tool in the pedagogical set of teachers—yes, the same teachers that would be ruined by the Common Core. Common Core standards are not about mistrusting teachers. Rather, they can serve as a lever for teacher empowerment.

So why does Mr. Young’s presentation matter? Why do we care what a 17-year old in Tennessee says about education policy? It matters because the viral video has lit a fire under the right-wing organizations that do not like standards. They do not like government involvement, even though these standards did not come from the federal government, nor did they come from state governments. They did, however, come from the NGA, which is composed of mostly Republican governors. This isn’t a partisan issue. This isn’t a liberal or conservative conspiracy to overthrow our education system. The standards are an important tool for education. I want to know how my children do on national tests so I know where they stack up. Teachers need to know so they can focus their efforts on behalf of individual students.

So, let’s change the mindset. National standards point us in the right direction. How we use them is up for debate.